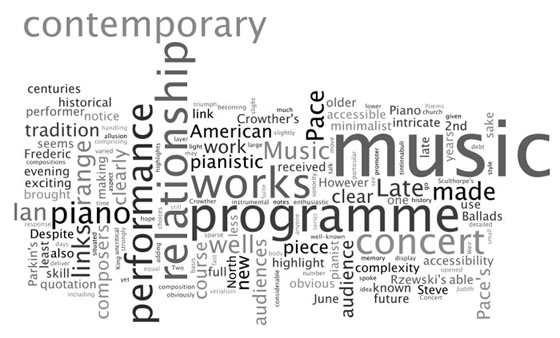 The Late Music concert on 2nd June should have been given by pianist Rika Zayasu, but she was unfortunately caused to cancel at very late notice. However, British pianist Ian Pace stepped in with less than a week to go before the concert, and the audience were not disappointed. I have known Ian Pace to be an exciting and virtuosic performer; one who is able to create contemporary interpretations of older works, shedding new light on them, as well as an accomplished performer and promoter of some of the most difficult, intricate, and innovative piano works of the twentieth and twenty first centuries. Despite the programme for the 2nd June not comprising Pace’s usual repertoire choices, it did offer a number of opportunities for him to display his considerable pianistic skill: from the fast and detailed passages of Steve Crowther’s Piano Suite and Michael Parkin’s Preludes and Fugues 1-4 to the texturally and timbrally rich North American Ballads by Frederic Rzewski, the music was varied throughout the evening. What is further to Pace’s credit is that he was able to deliver such an exciting and engaging performance of these works, including the world premieres of Crowther’s and Parkin’s works, having received the music at only 3 days notice.

Despite their being composed over a period of 40 years, it would be hard to give dates or a timeline to the pieces showcased in the concert. All of the works had a relationship with history, both through direct quotation, allusion to other music, and a pronounced relationship with the pianistic tradition of the late 19th and early 20th centuries. The composers themselves made several such links in their programme notes (Bach, Beethoven, Finnissy, and blues traditions were all mentioned), and yet others were clearly audible in performance. As such, the programme made clear that the historical piano tradition is still alive in contemporary composition and performance. The strength of this, of course, is that the programme was extremely accessible, even to audiences who do not regularly attend contemporary music; this was also clear since the small church was nearly full. By making links such as these, Late Music should hope to continue to draw new audiences to contemporary music in the future.

The highlights for me were Judith Weir’s surprising The King of France which made a link with mediaeval crusading music. Having an interest in such music myself, I was keen to see how such a relationship could be handled in equal temperament. Weir succeeded in making this link through distinct and separate instrumental timbres between sections, and frequent use of the lower range of the piano, adding an almost percussive layer to the piece. Frederic Rzewski’s North American Ballads were quite obviously a highlight for most of the audience as well as me. A now well-known work from the American minimalist canon, the piece combines pianistic skill, well known quotation, intricate harmony and full use of the range and sonority of the piano. Pace’s performance brought out all of the details and contrasts of the four movements, avoiding the possibility of their becoming nostalgic. Of the other works, Peter Sculthorpe’s compositions sat least well with me. His miniatures owed a clear debt to Debussy, but his handling of this relationship made his work seem the least contemporary of the programme. It is, of course, probably unfair to compare the works of all of the other composers with Rzewski’s minimalist triumph, but such a fantastic end to the concert colours the memory of what has gone before it.

Whilst the range and accessibility of the programme is clearly a strong point, one slightly negative aspect of the evening for me was the discursive relationship with accessibility that was presented. The pre-concert talk, by Steve Crowther and Edward Caine (whose sparse piece Two Poems opened the concert), brought up the idea of “complexity for its own sake” which both composers spoke strongly against, perhaps to highlight that they believed the evening’s music to be accessible where other music was not. In addition, the programme note for Arvo Pärt’s work Für Alina clearly situated his tintinnabuli style as being not just a move away from his serialism of the 1960s but an improvement on it. To me this seems to be an uncritical relationship with a large body of music, and while this particular programme could be said to have many obvious links with older music, it also seems to be a useful way to introduce new audiences to the huge range of contemporary piano music written in the last 50 or so years; much of this music may have less obvious links with an historical tradition, of course, but that is not to say that it is complex for merely the sake of complexity.

However, despite this slight downside for me, the performance received a deserved warm and enthusiastic response from the audience. Ian Pace has a continuing relationship with Late Music, so anyone who missed out this time will surely have the opportunity to hear him again at the concert series in the future, and on the basis of this performance that would be highly recommended.
Posted by Late Music at 14:25 2 comments: