Interview with James Else 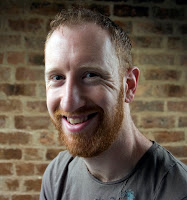 James is a York-based lecturer, composer and filmaker. He currently works as head of creative and contextual studies at the Northern School of Contemporary Dance, as well as being a freelance TV producer creating programmes for the BBC. Prior to this he completed a PhD in composition at the University of York with Nicola LeFanu. James Else’s new work, falling, unseen, will be premiered by Cuatro Puntos at the next Late Music concert, Saturday 4th June at the Unitarian Chapel, St Saviourgate, York.
Steve Crowther: Can you describe the work to us?
James Else: I almost perfectly fit the stereotype of western classical composer – male, white, middle class, practically middle-aged J. This left a difficult question of how to relate to the Rosegarden of Light project, which focuses on composers from the Middle East. I’ve never seen my music as means of making a political statement, yet against this backdrop and the current state of world politics it seemed impossible to avoid looking at these issues. Yet trying to impose my ideological beliefs through my music seemed naïve. The piece that emerged comes from these ideas churning through my mind, and is hopefully a reflection, rather than an imposition, of my ideals.

SC: Do you write at the piano, do you pre-plan? Can you describe the compositional process?
JE: I’m increasingly finding no single method of composing completely satisfactory. In this piece I changed between piano, violin (variously detuned to try and imitate the other strings) and a piano roll editor. Putting notes on a score increasingly seems to happen last.
I normally start by trying to create a fragment of music that excites or entices me, and then think about how that can work structurally. Quite often large sections (or even the whole piece) get deleted and I start again from the point I’m still happy with. The best of my pieces are probably the ones where the rules are intuitive rather than prescriptive by the end of the process.

SC: Is it important to know the performers? Do you write with a sound in mind?
JE: I feel that it can work equally well both ways. In either case, how the performers manipulate, interpret or develop the work is one of the most exciting parts of being a composer.

SC: How would you describe your individual ‘sound world’?
JE: Possibly the best way to describe it is that with each piece I’m trying to find a harmonic and structural language that responds to, and works with, the history and hierarchies of western music, whilst avoiding pastiche or blandness.

SC: What motivates you to compose?
JE: Art is important (and what Art can encompass is practically limitless). Being a very small part of that … is something that feels good.

SC: Which living composers do you identify with or simply admire?
JE: A cliché I’m afraid, but I do greatly admire Arvo Pärt, and in particular the relationship he creates between the mathematical and the spiritual. He was also the first composer I heard that made me feel that it’s OK to write contemporary classical music that sounds ‘nice’.

SC: If you could have a beer and a chat with any composer from the past, who would it be and why?
JE: Sappho could be interesting!

SC: …and a book?:
JE: The Farseer trilogy by Robin Hobb

SC: …a film?
JE: I just don’t find films have the same power as music to grab me again and again.

Composer of the month: Kareem Roustom 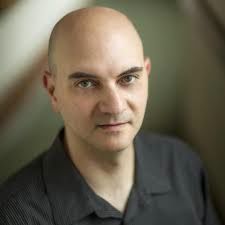 
KR: Here, my luxury item is quiet time, on the island it would probably be something very basic, like a blanket.
Posted by Late Music at 10:52 No comments: