Composer of the Month: Charlotte Bray 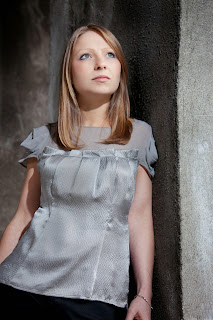 Charlotte Bray has emerged as an outstanding talent of her generation. Her music exhibits an uninhibited ambition and desire to communicate and is described as vivid, exhilarating,and richly expressive with a lyrical intensity. Charlotte has written for some of the world’s top ensembles and festivals, including the LSO, LPO, London Sinfonietta, Aldeburgh and Aix-en-Provence. In 2013, she was awarded a MacDowell Colony Fellowship and a Bogliasco Foundation Fellowship. Charlotte Bray's Those Secret Eyes will be performed by the Albany Trio at the next Late Music concert, Saturday 6th June at the Unitarian Chapel, St Saviourgate, York.


Steve Crowther: Can you describe the work to us?
Charlotte Bray: Those Secret Eyes is loosely inspired by Shakespeare's Macbeth, and principally the plays’ female characters: Lady Macbeth and the Witches. Set at night, it holds dark undercurrents of suspicion, sin, superstition, and mistrust. Governed by the principal themes of appearance and reality, and ambition and guilt, the piece is driven by a cruel, dry energy. This work forms part of an ongoing cycle of Shakespeare-inspired works that the composer is writing for piano trio.

SC: Do you write at the piano, do you pre-plan? Can you describe the compositional process?
CB: I sometimes use the piano, sometimes my cello and sometimes just paper. I write by hand, usually until I have an entire draft of the piece, and then I transfer to Sibelius. I pre-plan to have a clear overview of the piece and refer to the plan throughout, adapting it along the way as the piece evolves.

SC: Is it important to know the performers? Do you write with a sound in mind?
CB: Of course it is wonderful when one does know the performers one is writing for and this makes the experience special- to be able to imagine the exact sound and expression of a performer. If I don’t already know a performer or ensemble I search for recordings to listen to first.

SC: How would you describe your individual ‘sound world’?
CB: Personally I would describe my work as a journey of expression, of self discovery, if you like. Others have described my sound world as: highly diverse textures, emotional breadth, relentlessly energetic, a lightness of touch.

SC: What motivates you to compose?
CB: Hopefully whatever commission I’m currently writing! But more generally, the desire and impulse to create and explore through music, to discover, to develop particular fascinations further….

SC: Which living composers do you identify with or simply admire?
CB: Unsuk Chin

SC: If you could have a beer and a chat with any composer from the past, who would it be and why?
CB: J.S.Bach and his wife- I’d like to ask them which pieces she wrote!

SC: …and a book?
CB: a huge poetry compilation

SC: …a film?
CB: Game of Thrones (if that can count instead of a film)