Composer of the month: Joe Cutler 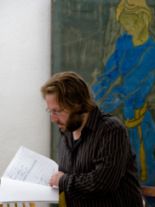 Steve Crowther: Can you tell us something of your background?

Joe Cutler: I grew up in Neasden (London Borough of Brent) in a family that was interested in music but not professionally (although I have a cousin who is an avant-rock drummer). I grew up playing a wide range of music from playing in orchestras to funk bands and went to Huddersfield Polytechnic really because I wanted to compose. That’s really where it all began. From there I did a post-grad in Durham and then spent three years in Warsaw studying at the Chopin Academy of Music on a Polish Government Scholarship. Since then I’ve lived in London and Birmingham (and in between) and also work a lot in Holland.

SC: Can you describe Gaia to us?

JC: It’s a very earthy piece in which I try to imagine an archaic, imaginary folk-music. There are a lot of open strings and double-stops, and the structure is rather like a big arch.

JC: I tend to have two procedures going on at once. On one hand, I try to conceptualise the piece and get a sense of the structure, intentions, and what I’m trying to communicate (this can take some time....). But then there’s also quite a chaotic, improvisatory side to writing a piece where I play around on the piano, or violin, or with visual material, trying to generate ideas without really knowing where I’m going. Gradually, these two procedures begin to coalesce.

JC: Over the years, I have tended to work with a number of different groups or performers on a regular basis so I then get to really know their sound and personality. I do like this way of working, although it’s exciting too to work with someone new too. I like to be able to imagine the way a piece will “feel” and sound and that is tied quite closely to who will be performing.

JC: Well Mozart I think would be fun, but I’d love to go for a Chinese with Morton Feldman, and I almost met John Cage in Huddersfield but was too shy to talk to him, so I’d like to put that right.

JC:
Richard Ayres - In the Alps
Morton Feldman - Coptic Light
Howard Skempton - The Moon is Flashing
Finn Peters - Butterflies
Joni Mitchell - Don’t interrupt the sorrow
Couperin - Les barricades mysterieuses
Paul Brady - Arthur McBride
The Divine Comedy - Our Mutual Friend
If I could select just one, it would be the Couperin, as that was the piece playing whilst our son, Arthur, was being born last year.
SC: …and a book?

JC: Can it be TV? The six series of Breaking Bad

JC: I like playing table tennis so a table and a table tennis robot (they do exist) which hits balls at you (you can control the type of spin on the ball too).
Posted by Late Music at 08:18 No comments: