Saxophonist Chris Caldwell managed and performed in The Steve Martland Band from 1996 until his untimely death in May 2013. He writes: 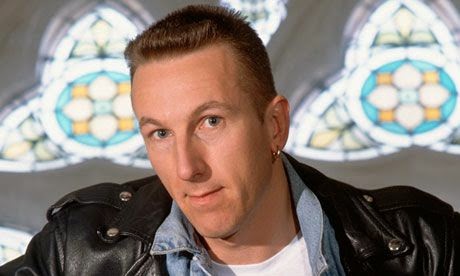 I was fortunate enough to join the Steve Martland Band on Baritone Saxophone in the mid 1990’s when the opportunities for performance and the recording of new music seemed to be in its heyday. The band first recorded with Tony Wilson’s seminal ‘Factory’ label and then with the German record label BMG, but changes in the music scene were happening very quickly. Marketing and hype were the ‘buzz words’, new music for some reason couldn’t just be what it was, but had to be sweetened by what became a ‘cross-over’ revolution. This mixing of styles started to be perceived as a dumbing down, if you knock off the musical edges you end up with something edgeless, characterless and devoid of spirit..

Steve’s music avoided all of this, he hadn’t been forced into combining marimba and violin with saxophones, drum kit and electric guitars. This was his style, not a compromise, the public knew this truth and his music naturally ‘crossed- over’ so many of the stereotypes without even trying. The Steve Martland Band toured the world (Australia, America, Asia & Europe), where it was received with an enthusiasm not usually experienced in classical music festivals.

Beneath Steve’s ‘edgy’ appearances was one of the most generous and giving people I have ever had the pleasure of working with, he was a huge supporter of a British education system which gave opportunity to all, he delighted in giving hours of his time and energy (fueled by coffee!) in the support and nurturing of a new generation of composers. I personally miss hearing his loud and impassioned voice over all things creative and artistic, and how this was totally relevant to our democracy. The recent UK/Gove re-shaping of music provision in our state schools would I’m certain, have received the Alex Ferguson ‘hair dryer’ response. It is our responsibility as artists/performers and concert goers to continue to pump out, the Martland volume.
Posted by Late Music at 14:49