Composer of the Month: Roger Marsh

Composer of the Month: Roger Marsh 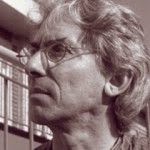 ﻿﻿Roger Marsh studied with Bernard Rands at the University of York, UK, in the early seventies. He spent two years (1976-78) at the University of California, San Diego, on a Harkness Fellowship. From 1978 to 88 he lectured at the University of Keele, before returning to York where he is currently Professor of Music. His music has been performed and broadcast widely. Roger Marsh’s new work, Running, Jumping, Standing Still, will be premiered by the Late Music Ensemble, conductor James Whittle, at the next Late Music concert, Saturday 5th July.
Steve Crowther: Can you describe the work to us?
Roger Marsh:  It’s a piece for instrumental ensemble in three short movements.  It’s called ‘Running Jumping and Standing Still’ – which was the title of a famous short film in the 1950s made by Peter Sellers and the other Goon crowd.  I’ve always loved the title.  The three movements are all, in their own way, concerned with physical exercise (I thought of calling the piece that). Two of the movements are a re-working of earlier material – a piano piece I wrote last year (Descending) and a solo piano section of my music theatre piece ‘Rising’ (Rising).  The third movement is all new and is the Running Jumping and Standing Still movement.
SC: Do you write at the piano, do you pre-plan? Can you describe the compositional process?
RM: Actually I used to always compose at the piano, a bit too much really; I would spend forever trying and re-trying chords and changing them, adding to them every time I sat down to carry on working.   But now I don’t use the piano so much – just to get initial ideas, and then I do almost everything at the computer with good old Sibelius playback allowing me to check things. I don’t know if it’s better, but it seems to work and I spend less time doodling.
Again, I used to re-plan, but I moved away from that quite a long time ago.  I think and imagine a lot in my head (and at the piano) before I start writing – which is a less rigorous kind of pre-planning I suppose.  I mean, I don’t start from scratch with a clean page in front of me.  By the time I’m thinking about writing something down I’ve done a lot of composing in my head already.  Usually.  There are always exceptions.  With Pierrot Lunaire I had 50 poems to set, and I gave myself the challenge of starting with the first one and never moving on until I had finished a setting.  Some of the settings went from initial idea to finished score in a matter of hours.  Some took days.  But I didn’t allow myself to think about the next one until the one in progress was done.

SC: Is it important to know the performers? Do you write with a sound in mind?
RM:   Very often that’s the case.  Not always.  Two of my recent pieces were for the Hilliard Ensemble – you can’t write for them without hearing their sound as you write.  When I wrote my Lullaby I had a particular sound in mind, but no idea who would perform the piece.  In the case of the new piece, I knew who the performers would be, and it has influenced me a bit, but not a huge amount.  Except in ‘Rising’ because there’s a little bit of theatre involved, and I thought carefully about who would be doing it.
SC: How would you describe your individual ‘sound world’?
RM:  That’s hard.  The one thing I can say that might help is that I think a lot about chords.  I almost said ‘harmony’ there, but I find that that invokes notions of a harmonic theory, and I don’t have one.  I just like to hear chords which make sense in relation to one another, and which seem to have a purpose, and which are rich and interesting.  I use the same kind of chords a lot, so I think you can listen to my music and say it has a recognizable sound world because of that.  And melody too, but more in some pieces than others: Pierrot Lunaire and the Hilliard pieces are full of it, Running and Jumping less so (but a bit).
SC: What motivates you to compose?
RM: Another huge question.  The desire to make something; to make something different; to provide something for a performer or ensemble that has asked for it.  Like all composers, I suspect, there are days when I wonder why I put myself through it (because it can be hard and frustrating), but there’s a satisfaction in having made a piece that seems to be valued.
SC: Which living composers do you identify with or simply admire?
RM:  I admire and find inspiration in so many kinds of music it’s impossible to give a list.   When I was younger I used to be a bit clearer about it: Britten, Stravinsky, Berio, Stevie Wonder, the Beatles. Those names would all still be on the list, but the list would be so long and I wouldn’t be sure that they would be at the top of it.
SC: If you could have a beer and a chat with any composer from the past, who would it be and why?
RM:  I had tea and a chat with Maderna once, and a few beers with Berio.  But I think I was so overawed to be in their presence it was less a chat and more an ‘audience’.
SC: Now for some desert island discery – please name eight pieces of music you could not be without, and then select just one.
RM:    The truth is there is no music I couldn’t live without.  But I’ll play your game:
Oedipus Rex (Stravinsky) blows me away every time.
Bach B minor mass (ditto)
Fulfillingness First Finale (Stevie Wonder).
Mahler 9, with Das Lied on the B side.
Love’s Old Sweet Song (sung by Anna Myatt – as on the Ulysses audiobooks I produced)
Kinshi Tsurata singing Dan –no –ura (Heike Biwa).  It’s used in the film Kwaidan –the last story about Hoichi the Earless.  Tsurata – blind female singer and Satsuma biwa player – was phenomenal.
Smiley Smile (Beach Boys)
Il Cor Tristo (Marsh) - it’s the piece of mine I’m most proud of and I most like listening to.
SC: …and a book?:
RM:    Ulysses
SC: …a film?
RM:  The Godfather parts 1 and 2
SC: … and a luxury item?
RM:   Binoculars
Posted by Late Music at 20:05