Composer of the Month: David Power

Composer of the Month: David Power 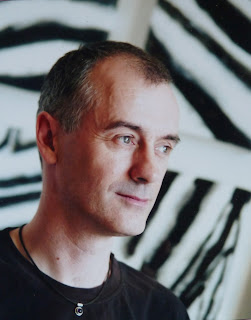 David Power was born in London in 1962. His initial interest was experimental rock music but, in due course he discovered the music of Boulez and Stockhausen and converted to contemporary classical music. In the late 1990’s he simplified his style and also re-integrated his rock music influences into his work. His music has been widely performed throughout the UK and, more recently in Europe and the USA. Recently he has become interested in collaborative work and this has seen his music played as soundtracks for short films, in art galleries, at literary events and even at new age festival as well as in the concert hall. His Eight Evening Songs appeared on the acclaimed Songs Now CD on the Meridian label in 2012 and his Eight Miniatures will shortly appear on a CD of British piano miniatures from the last hundred years. David Power’s new work will be performed by the Ebor Singers, conductor Paul Gameson, at the next Late Music concert, Saturday 3rd October at the Unitarian Chapel, St Saviourgate, York.
Steve Crowther: Can you describe the work to us?
David Power: It is a choir piece in two movements and lasts about eight minutes. It sets extracts of two poems by Harriet Tarlo. I have written quite a lot of vocal music in recent years – mainly songs for voice and piano – and have found ever more ways of close reading the texts and then using this close reading as a starting point for music that can have a variety of different types of connections and relationships with the words. I have even experimented with making videos for a couple of my songs as a way of adding a third layer of meaning to the song as a whole. You will shortly be able to see this on my website – www.davidpowercomposer.co.uk
The first of the Tarlo settings is short and quite quick. It keeps repeating the line ‘white went round you’ and sets the other lines against it. The second poem I set is called Graphite and Harriet has written it in such a way that there are evocative three word phrases such as ‘sea layer sky’ on the page with plenty of space before the next phrase comes. I have responded to this simply by setting the words slowly and allowing them to speak for themselves. As I say, the two movements last a total of about eight minutes
SC: Do you write at the piano, do you pre-plan? Can you describe the compositional process?
DP: Until recently I always wrote at the piano except when writing guitar music. Nowadays, as I am using electronics more, a lot of the work is done with a synthesizer and on computer. I do a certain amount of pre-planning for larger pieces but mostly prefer just to jump in and get on with it. My preferred way of writing is to write a short piece in a single day. Knowing I am going to try and do that really concentrates my mind and is very rewarding when it goes well. I once tried to equal Schoenberg’s achievement of writing three songs in a day but only managed two – and one of them was no good!

SC: Is it important to know the performers? Do you write with a sound in mind?
DP: It is useful rather than important. More often than not, I have written without knowing who the performers will be and, in a few cases, the pieces remain unperformed. But they were pieces I wanted to write
SC: How would you describe your individual ‘sound world’?
DP: Well that is hard for composers to say about their own work. Tom Armstrong says my music is accessible but doesn’t take easy or obvious routes to its accessibility. I think that is perceptive. I suppose I would say my vocabulary is largely – though not entirely – traditional but the sensibility of my music is an early 21st century one.
SC: What motivates you to compose?
DP: It is very hard to untangle all of this but one big factor is simply how rewarding I find it when I write something I believe has merit.
SC: Which living composers do you identify with or simply admire?
DP: Well I admire any composer who has written first rate music that I like and, in my case, this ranges from composers such as John White to James Dillon. I identify with a much smaller range of composers. At the moment, I feel a strong affinity with what Michel van der Aa tried to do with his A Book of Sand which is, according to the publicity blurb, the world’s first interactive song cycle. There are aspects of this work that I dearly wish I had thought of.
SC: If you could have a beer and a chat with any composer from the past, who would it be and why?
DP: Probably Erik Satie. I love a few of his pieces and like quite a lot more but never feel I really get where he is coming from. What is behind the irony and the eccentricity? I feel you would have to actually spend time with him to start to answer that and I would like to know the answer. However, I would have to make it clear it would be one beer, and not a session as, even in my youth, I doubt I could have kept up with Satie!
SC: Now for some desert island discery – please name eight pieces of music you could not be without, and then select just one.
DP:
Ravel - Le Tombeau de Couperin
Sibelius – Luonnotar
David Bowie – Outside – including the Leon outtakes
Boulez – Repons
Massive Attack – 100th Window
Roger Marsh – Pierrot Lunaire
Michel van der Aa – The book of Sand
David Power and David Lancaster – Double Vestiges.
Narrowing this down to just one is hard. If I really did have to go to a desert island, I would probably take Double Vestiges, not because it is the best but because of its links to what I had done with my life to date.
SC: …and a book?:
DP: if I had to leave for my desert island now, I would take IQ84 by Murakami as it’s amazing but I am only half way through and want to find out how it ends.
SC: …a film?
DP: Wings of Desire
SC: … and a luxury item?
DP: Plenty of good real ale and good red wine.
Posted by Late Music at 13:22